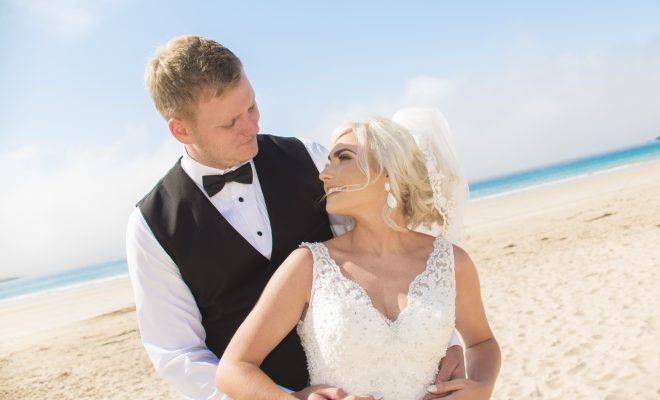 Summer sun beamed down as Laura and Clark say ‘I do’

As Laura Houston and Clarke Stevenson made their vows to be together forever, beautiful and emotional music rang around the walls of their local church. Indeed walking up the aisle to Donna Taggart’s ‘This I Promise You’ was a moment that Laura will never forgot, and amazingly she managed to hold back her tears of joy.

The pair were wed on June 29, 2018 at the Church of the Immaculate Conception, Strabane in an intimate and personal service celebrated by both Fr Declan Boland and Fr Michael Doherty.

Their wedding reception took place at The Downings Bay Hotel, County Donegal – a family-run venue much loved and familiar to Laura due to previous summers spent there. The Strabane woman also appreciated its large square function room with no obstructions, and best of all, it was located beside a stunning, glittering beach – perfect for lovely pictures.

Laura, who is a qualified teacher, first met Clarke, an electrician also from Strabane, at an under-age disco in St Patrick’s Hall, Strabane in 2001. When they were in sixth year, in 2005, they attended Holy Cross College together but it wasn’t for more than a decade that they had their first official date at the Farmer’s Home, Strabane. 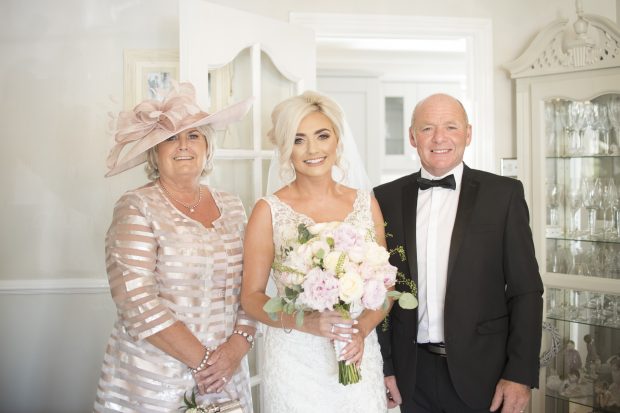 “We courted a few times over the years, but only officially started dating in January 2016,” Laura explained. “During that first date we both knew that we found what we were looking for in each other and haven’t looked back since… It only took us 12 years to realise!” she laughed. “Now we are happily married and have a beautiful son together.”

Laura added, “What I like about Clarke is that he is genuine and a true gentleman. He’s a great father to our son and he always finds ways to surprise me. I honestly couldn’t have picked a better partner.”

Clarke unexpectedly proposed around Christmastime in 2016 with a gorgeous engagement ring which he had picked by himself. The stunning ring featured a one carat diamond nestled in the centre of a platinum band betwixt a double row of glinting diamonds. 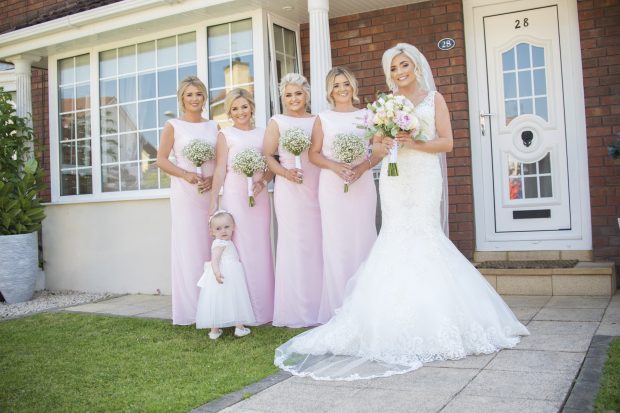 “Clarke had planned to propose at a family party but after some people at the party caught wind of it, he took fear and decided he actually was too nervous to ask,” Laura recalled. “So, unexpectedly, he decided to ask me the following night when it was only the two of us in Cafe Fresco and the mood was right.

“I thought he was acting strange, asking me if I was almost finished my dinner and nearly clearing the plate from beneath me. “But I just had no idea that he was bursting to ask me the big question.” But finally Clarke found his perfect moment, and got down on one knee.

He told Laura that he was the happiest he’d ever been, and the only thing that could make him even happier was if Laura became his wife. “Clarke’s proposal was perfect,” Laura said. “I was shocked and overwhelmed; I didn’t expect it at all. “I couldn’t wait to ring round everyone and tell them the news, but half of them already knew as it was supposed to happen the night before!” 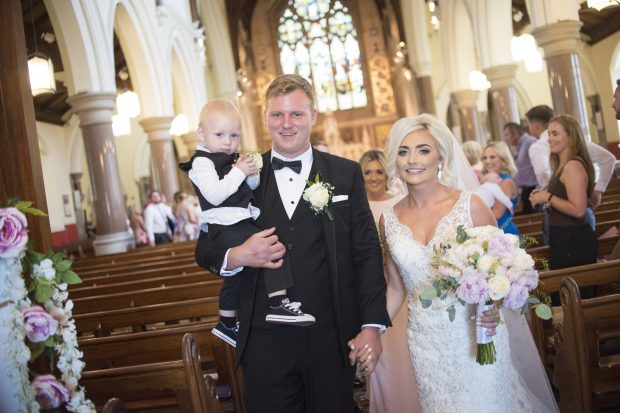 The newlyweds, Laura and Clarke Stevenson with their beloved son, Roman.

When the dawn of 2017 hit, the pair began to plan their wedding by looking at venues. “I knew I wanted a traditional wedding and had an idea of the colour scheme,” Laura described. “I also liked the idea of pastel colours and I could picture the bridesmaids in soft pink.”

Ironically, Laura’s dream gown was one which she said she ‘wouldn’t like’ before she tried it on! This particular gown was picked out for her by an assistant in McElhinneys, Ballybofey – the third dress shop Laura tried. The sparkling ivory lace dress featured a fishtail design with beaded back detail, and much to Laura’s surprise – straps! “I was urged to try on dress with straps which I said I would hate,” Laura recalled.

“I told the lady that I would try it, but I knew I wouldn’t like it. As soon as I had it on, I couldn’t believe it – I loved it. It was lacy but still had a bit of sparkle and the detailing at the back was gorgeous. “When I turned around, my mum, Dolores and sister had tears in their eyes. That was when I knew for certain I had found my dress.” Laura added, “The veil I wore was something borrowed from my sisterin- law, and it also came from McElhinneys.” 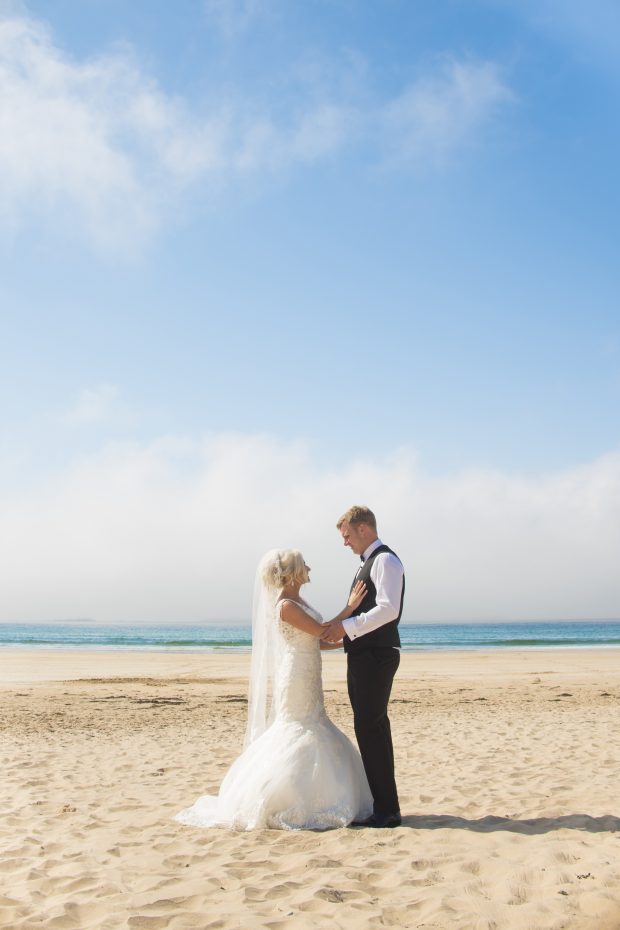 Newlyweds Laura and Clarke enjoy a beautiful wedding day in the summer sun.

When Laura’s wedding day finally arrived, she described feeling calm and chilled – something which impressed her, as she was convinced that she’d be feeling the nerves. She spent the morning of her big day relaxing in the salon, and getting pampered with the girls. Then she sat outside in her back garden underneath the beaming sun and sipped her Prosecco.

“I couldn’t wait to put on my dress,” Laura said. “The morning went so quickly, and before I knew it we were in the car heading to the chapel. It was a scorcher that day and the sun was splitting.” She added, “We had booked a vintage car to take us to the church, but the day before we thought it might be too hot to sit in a car with no air conditioning so thankfully Glendale Limousines allowed us to swap our car to a silver Chrysler with air con. “We were so glad we made the change.”

Describing their wedding service as lovely, intimate and personal, Laura said that the time simply flew past. “I walked down the aisle to Donna Taggart’s ‘This I Promise You’, and I felt a little emotional as I listened to the words although I managed to hold in the tears,” Laura said. “Fr Boland made all the guests of the bride and groom’s side cross over and hug each other instead of shaking hands so that everyone could get to know each other better. “It was a nice touch and a great way to break the ice.”

Laura continued, “The service became a little emotional when we remembered Clarke’s dad, Martin who sadly couldn’t be with us on our special day. “The music in the chapel was sung by Chloe and Darci Wilders and it was perfect.

Overall we would say that the day went better than we ever expected,” the 29-year-old concluded. “Everything went so smoothly. If we had to do it again, we wouldn’t change a thing. “We had the sunshine, and everyone enjoyed themselves, so that’s all we could have wished for. We both absolutely loved our big day and were happy to be able to share it with our amazing friends and families.” 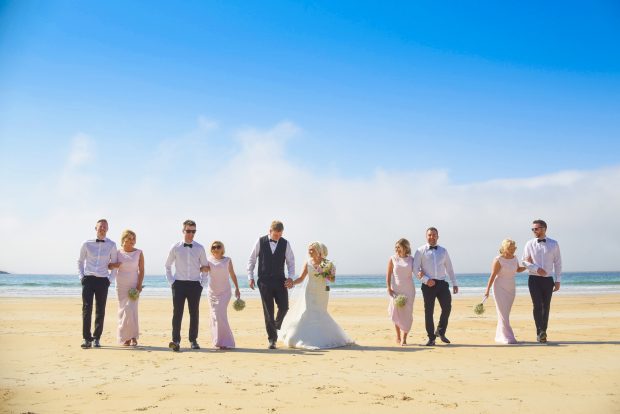