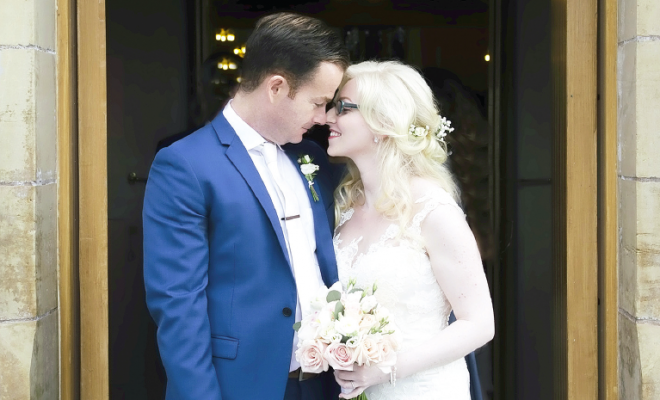 IT was simply “laughter at first sight” for newlyweds Stacey Curran and Stephen McCarney. Now in a relationship that has spanned six years, the pair were married by Fr Jim Moore at St Lawrence’s Church, Fintona on March 18.

First meeting at the wedding of Stephen’s brother in autumn 2010, Stacey said that she was initially attracted to his “witty and funny” personality displayed during his best man’s speech.

“He must have noticed me laughing as it gave him an ice-breaker for later in the day when he began chatting to me at the bar,” she reflected. “I’m glad my cousin invited me along to that wedding, or my life wouldn’t be the same today.”

Moving to sunny Australia a year after they got together, it was on Stacey’s favourite beach in Perth that Stephen (35) asked the Fintona girl for her hand in marriage on September 5, 2014.

Setting his new camera up on a tripod and hitting the record button, the Seskinore man got down on one knee and presented Stacey (27) with a “perfect” white gold trilogy diamond ring purchased from Michael Hill Jewellers in Perth.

“I initially thought he was putting the camera on a timer to take a picture,” Stacey described. “But it’s really nice that he captured the special moment, and it will be good to show our children some day.

“I couldn’t have been more happy or excited. At first I was lost for words – I couldn’t believe it.” Eager to plan their wedding straight away, the couple just happened to be returning home to Ireland to attend a friend’s wedding mere weeks after the engagement.

Taking the opportunity to look at venues close to home, Stacey soon fell in love with the beauty of the Villa Rose Hotel, Ballybofey. “We knew it was the venue for us,” she said. “The staff were lovely and very helpful, the honeymoon suite was amazing and we had heard fantastic reports about the food and service.

We had made up our mind before we left that day, and booked our wedding and reception date before we travelled back to Perth.” Despite “not looking forward to wedding dress shopping”, Stacey found the perfect gown in the second store she visited.

Featuring a lace bodice, a satin skirt and a backless-design, she described the ivory fitted gown from Pronovias, Barcelona as “beautiful”. “I just had to try it on,” she said. “I couldn’t have imagined a dress would feel as good as this one did, and I was fortunate to find it so quickly.

“I ordered it from Tuscany Bridal in Leederville, Perth and had to wait for it to come from Barcelona.” Hoping for a “classic look” wedding, Stacey had her heart set on blue bridesmaid dresses, and pastel and cream-coloured roses to walk up the aisle to.

On the morning of her big day, the blushing bride described feeling relaxed – however, her nerves began to kick in while she was in her silver limo en route to the church. “We booked a band called Blush from Dublin who performed our chapel music and played at the reception,” she explained.

“The lady sang beautifully at the chapel and the whole day was emotional for us.” Whisked away to the reception with Stephen in a classic silver 1950s Bentley, it was soon time for the newlyweds to dance the night away after tucking into their three-tiered cake, decorated with white flowers of icing. 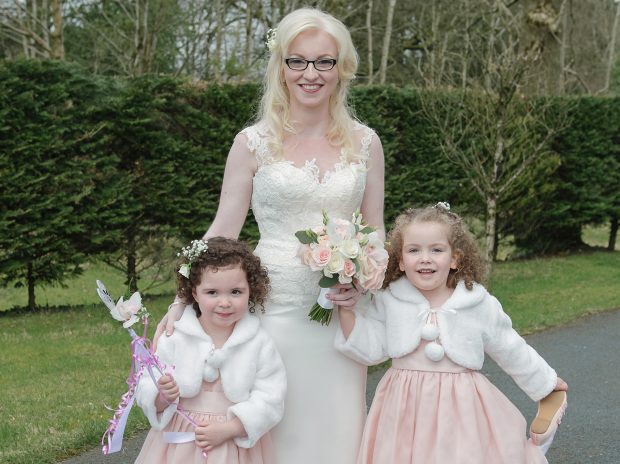 The new Mrs McCarney with her flowergirls Ellie Owens and Cara Pritchard.

“As much as I could have imagined how great I would feel on our wedding day, it was even better,” Stacey concluded. “It was hard work planning it from the other side of the world but the memories we have will be forever special.

“We feel so lucky to have had the best wedding we could have dreamed of, and are very excited for our future and all the adventures that will bring.”