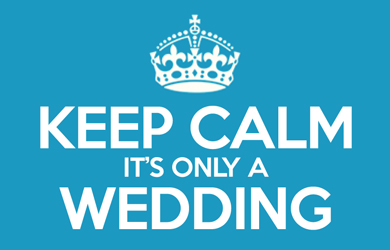 Revenge of the Bridezilla!

Watch her from afar as she devours her dinner after a long day of Bridezilla-ing. A shameless carnivore, the Bridezilla seeks a diet of hoteliers limbs washed down with the tears of bridesmaids. As she settles in for a night of peaceful sleep, the good people of the North West can finally relax, safe in the knowledge that their computers won’t ping with the fury of her digital vitriol, their phones won’t play a merry tune that disguises the hell demon on the other end. Yes, the Bridezilla is sleeping soundly now, tomorrows “hit list” stuck to her face with her own venomous drool.

I really hope you read that in a David Attenborough voice. If not go back and try it! Much more craic! So, the bridezilla isn’t really a wild animal she is of course a mere woman who happens to be planning a wedding. We’ve all heard the term and some of us have even been bored enough to watch the TV show, but what qualities are needed to accurately call oneself or one’s sister, cousin, friend or work colleague a “bridezilla”? In my quest to answer the question, I armed myself with a harpoon (you never know) and ventured to my keyboard where I typed the word into Google. 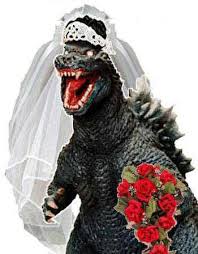 This seems to be the acknowledged form that the Bridezilla takes. Some teeth hi! Wonder where she plans to get them whitened?

Joking aside, the term “Bridezilla” has become one I have learned to loath with the fires of a hundred hells. Let’s all face it, we all know someone who has behaved in way less than exemplary in the lead up to their big day. Ordering people to lose weight, to not get pregnant or reducing grown men to tears are all tell-tale signs that you’ve taken a one way ticket to crazyville and it may be time to dial back on the nuts! It seems to me, however that the term “bridezilla” is thrown about too easily and used to describe any bride who is simply trying to organise her day her way.

For example, a bride who gets a bit ratty because her bridesmaids dresses have come in the wrong colour is not a huge Japanese reptile, she is still just a bride who didn’t want her bridesmaid colour to be a lucky dip. What about a bride who has a meltdown when her photographer says he’s going to send along his assistant? Are scales evident? Do you see aircraft flying over Fermanagh with huge spotlights looking for her? No, of course not. That’s because she’s not a bridezilla, she’s just a girl who doesn’t want her wedding album to look like a six year old’s school project.

I wonder why we don’t talk about “groomzillas. Surely men care about their wedding day just as much as we do or at the very least care enough about the money being spent to push to get it the way they want? Right enough they’re probably not going to care if their best man puts on a few pounds or their father’s fake tan turned out blotchy but I’d like to see their reaction if the hotel closed the bar early! 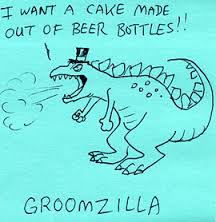 As I said before, I’m far from a bra burning feminist but I wonder why when a man questions something or stresses about the details, the only thing he gets accused of is being a “perfectionist”.

As for me? Well I’m keeping calm. But then my wedding is still a brave few months away. At the moment, everything is ticking away nicely and the pieces are falling into place without much effort. I know it can’t stay that way forever, I’ve seen that awful TV show and know that something is bound to go wrong somewhere along the way. The only thing I can control is my reaction to it. Might I succumb to dreaded bridezilla-like tendencies? I really, really hope not. But if I do, even if I’m knocking over buildings with my huge tail and sending people screaming from me in blind terror, please don’t call me a “bridezilla” just tell me I look pretty and call me a perfectionist, that way I won’t have to bite!