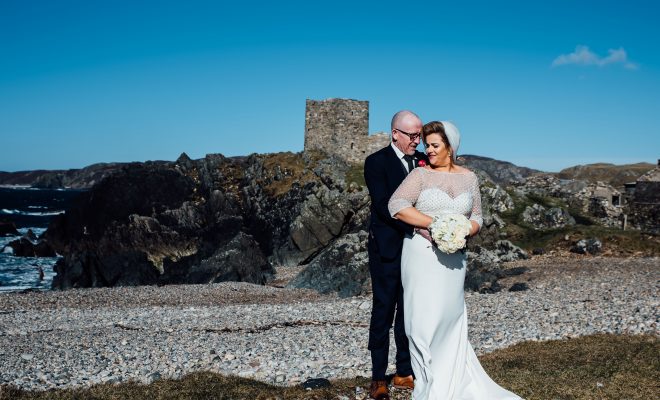 There were tears of joy, personal moments and lots of laughter during Keira Lindsay and Sean Browne’s perfect wedding day at the beautiful coastal town of Ballyliffin in Donegal.

The pair were wed at the Ballyliffin Lodge Hotel during a bespoke ceremony performed by independent celebrant, Simone Walsh on April 4, 2018. As the Donegal lodge had made such a strong impression on the newlyweds prior to their big day, their wedding reception was also celebrated at the venue, which they described as “warm and welcoming”.

Keira, a service manager at Mencap, first met Sean, who is a joiner, in Sallys, Omagh in early March 2011 and they began dating the following month. They were together for seven years before the Newtownstewart man asked Keira, who has been living in Killyclogher since 2010, for her hand in marriage on July 6, 2017. 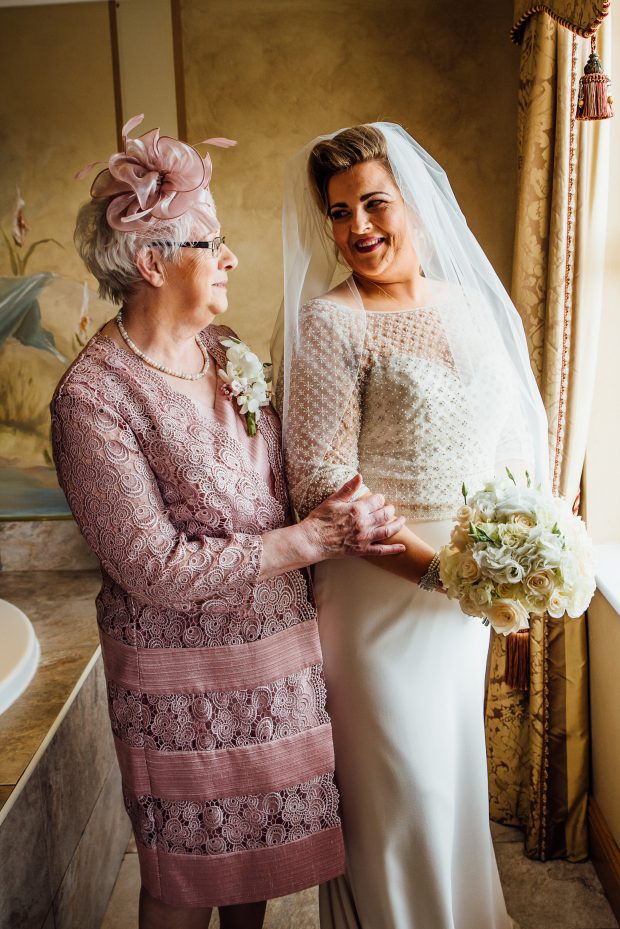 “I returned home from a two-day work trip and sat down on the sofa beside him,” Keira reflected. “He then said, ‘What about getting married?’. “It was the last thing I expected to hear… He obviously really missed me!” She added, “I was completely overwhelmed and delighted. I had begun to give up hope of it ever happening. “Sean is a real man’s man; he provides for, loves and protects his family. “I love that we have the same outlook on life and we complement each other. We make each other better people.”

The happy couple then planned a special weekend away to celebrate their news, all while shopping for Keira’s perfect engagement ring. “Sean bought my ring in Monaghan on the way home,” Keira said. “I was glad we did it this way, as I am not sure what he would have picked. We chose a lovely 18 carat gold diamond cluster band in the end.”

With their minds set on a short engagement and a traditional wedding day, the newlyweds-to-be set the date of their wedding for the spring of 2018. This gave them approximately nine months to plan for the occasion. “I didn’t have a theme or anything when planning for the day,” Keira admitted. “However my sister is a florist so I knew she would sort the flowers to my taste. And I felt that when I found my dress, it would set the theme for everything else.” 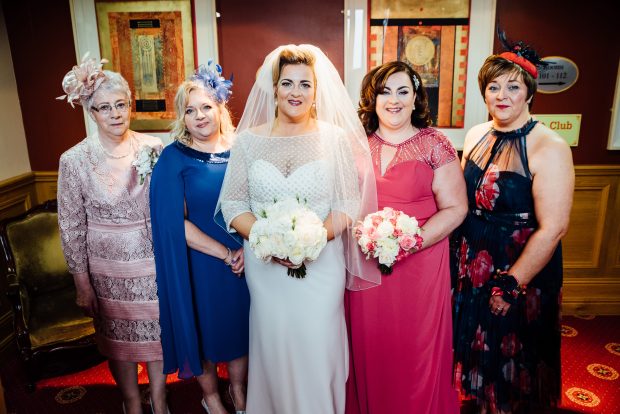 The ladies are looking just lovely on the wedding day of Keira Browne (née Lindsay).

The Dunloy native visited about five shops, both locally and further afield, to find just the right gown. However it was in McElhinneys in Ballybofey where one particular strapless ivory wedding dress – with a dainty design to boot – stole the show.

“I really wanted a dress with sleeves and there wasn’t as many in the shops then as there is now,” Keira reflected. “The dress I chose had a lovely small train, but the part that stole the show for me was its diamante and pearl encrusted bolero jacket that went over the top of the dress. It had gorgeous sleeves!

“I just loved the gown’s simplicity and sparkle. I also thought it was a timeless design, and hope I will look back in years to come and still think it is beautiful.” Keira added, “I shopped both locally and far away for my dress, and I can honestly say I didn’t have a negative experience anywhere.”

On the bitterly cold, but sunny morning of her big day, Keira felt a mixture of nervousness and excitement. “I was very quiet most of the morning, which is completely out of character for me,” she said. “I was just trying to hold it all together. “Sean had a walk on the beach early in the morning to gather himself.”

As the pair got married in the Ballyliffin Lodge Hotel, Keira rented a house nearby for handiness sake and so she didn’t have far to travel for her ceremony. It was a special location that won Keira’s heart one chilly winter’s day about three years ago. 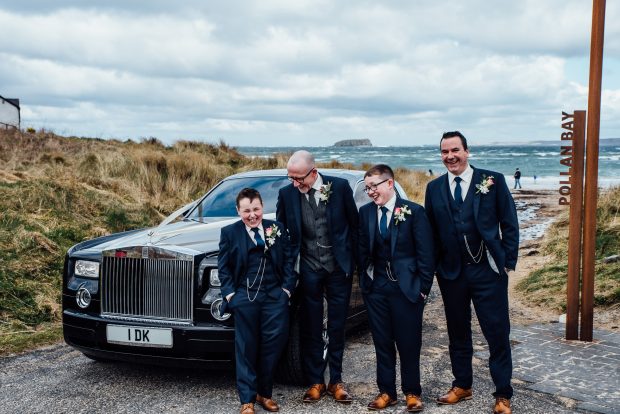 “I had brought my son to a Santa trail at the Famine village near Ballyliffin, and we went to the Ballyliffin Lodge for dinner afterwards,” she recounted. “I remember the place and the staff being so warm and welcoming, and there was something really intimate and homely about the hotel. “I convinced Sean to come and view it when we got engaged, and thankfully he was as smitten as me, and booked it there and then.”

Sean and the boys, however, enjoyed a classy ride in a Rolls-Royce Phantom and a stop-off at a nearby beach before reaching the Ballyliffin Lodge. The newlyweds-to-be hired independent celebrant, Simone Walsh for their unique and personal service, which Keira described as “perfect”. “She was amazing,” the new Mrs Browne said. “She wrote a ceremony individually tailored to us, and it was so very special. “I read it about three times before the day and cried every time. She got us completely and I felt our ceremony embodied us and our families.”

Keira walked down the aisle to ‘I Promise You’ sung by James Bradley. A moment, she said, that will forever hold special memories for her. “We also had a ring warming ceremony where our rings were passed round all the guests to make good wishes,” Keira continued. “And my two best friends managed to drop the rings on the way!

“We also had a sand ceremony and the celebrant described both of us and our children while we poured sand into a vessel.” The 39-year-old added, “We loved every minute of our day, and lots of our guests commented on how special it was. “Sean and I were the last to bed, at around 5am! “My dad, Tony who is in his seventies, also performed a few songs for us in the evening. “Our wedding was just what we wanted it to be. It was just perfection in our eyes.” 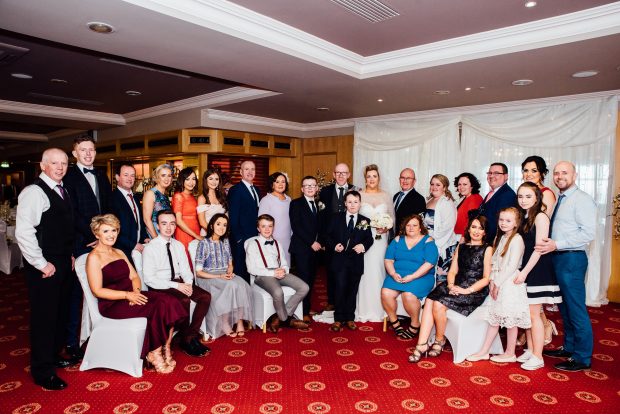 Everyone had a fantastic day out at the Ballyliffin Lodge Hotel, Donegal, during Keira and Sean Browne’s wedding day.

Related ItemsBallybofeycelebrantCreative Idea’sDonegalGemma G PhotographymarriageMcElhinney'sThe Ballyliffin Lodgetraditional
← Previous Story Holiday romance turns into a lifetime of love for Claire and Josh
Next Story → Put some winter sparkle into your wedding with the help of North-West Brides.