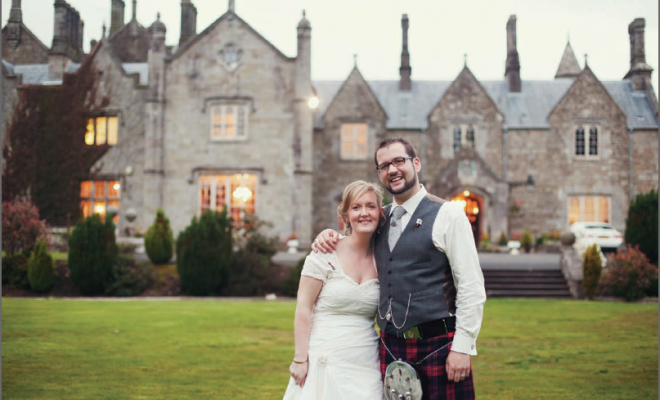 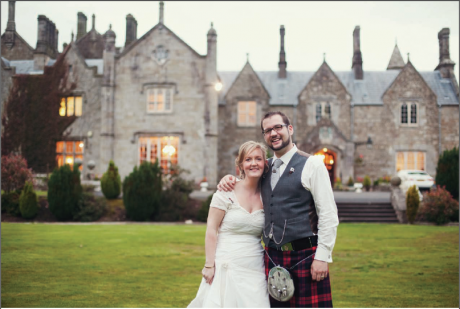 When Ashley Hassin married Lynda Brown in Desertcreat Parish Church outside Cookstown during the summer there wasn’t a single part of their special day which escaped the personal touch.

Even the start of their relationship was quite unusual as the couple had only been going out for six months when Ashley popped the question in a butterfly house in Seaforde, Co. Down. However the couple had known each other for years after they were introduced by mutual friend Stephanie Elliott, and once Lynda had uttered the vital ‘yes’ they set the date for their wedding.

Lynda, a self-employed ceramist by trade was determined this would be a ‘hands-on’ wedding. She selected a vintage, handmade theme with close family and friends contributing as much as possible.

It was the dress, though, which Lynda had special plans for. As the talented bride explained, “I like to customise clothing, especially for weddings, and I was determined that my own was not going to be any different. I found the perfect, simple dress from Perfect Day in Lurgan and after the alterations were done, I immediately started work. I adorned the bodice with over 200 ceramic buttons, and added a shawl, netting and ceramic flowers. It was a lot of work, but in the end I had the perfect dress”.

The bridesmaid’s dresses also got the ‘LyndaB’ treatment, bought from Something Special, also in Lurgan. They were platinum silver, floor length dresses with one strap, to which Lynda also sewed ceramic buttons. The bridesmaids, Lisa Cochrane and Emily Henry, both friends of the bride were thrilled to be wearing something so bespoke. The eye-catching bouquets were also made by the bride and they were hand crafted ceramic flowers on willow sticks.

Not to be outdone, the groom had a kilt specially made from the ‘Brown’ Tartan (Lynda’s family tartan) for the occasion. The groom’s party, which was made up of Ian Scott, best man (who is a brother-in-law of the groom), Jonathan Hassin groomsman (a brother of the groom) and ushers Andrew Brown (brother of the bride) and Adam Hassin (brother of the groom) each wore a different tartan with the McKenzie, Royal Stewart and MacLean of Durat tartans being represented. They also wore Grey Ascott waistcoats bought from Parson and Parsons. The buttonholes were porcelain flowers, accented with the Brown tartan of the groom.

On the morning of the wedding the bridal party travelled to Desertcreat Parish Church, just outside Cookstown in a vintage cream VW camper van which was hired from Legends Cars.

Looking simply stunning Lynda walked up the aisle, which was flanked on each side with beautiful flowers given from the gardens of friends and families and arranged into decorated tin cans by the mother of the bride, Lynda’s two aunts Alison and Joan and her granny Porter.

She arrived to the tune of McDowell’s ‘To a Wild Rose’, played by the groom’s aunt. The ceremony was performed by the Rev. David J. Bell and Pastors Chris and Debbie Leech, with the hymns played by Garry Gilliland and David Betts.

Continuing the vintage theme of the day, the couple commissioned John Bird of Loving Spoonful to make their wedding bands, which were fashioned from antique tea-spoons. Lynda says, “It took a long time to find the perfect wedding bands, something that truly reflects us. When working at a Craft Fair I spotted the rings, and they were perfect!”.

As part of the service the couple decided to perform an ancient Scottish tradition called ‘The Pinning of the Tartan’.

Upon Rev. Bell’s pronouncement of ‘man and wife’ the mother of the groom pinned the family tartan (this case being the Ancient McGregor) unto the bride, signifying her acceptance into the family. The happy couple were piped down the aisle by Pipe Major Robert Black, and Ashley’s two uncles Trevor and Jackie to the tune ‘La Baum’.

On arrival to Parkanaur guests were greeted to refreshments all served in vintage tea-sets which were graciously lent by a friend of the couple Marion Hayes, while the couple had their pictures taken by Yvonne Martin of Creatively Captured. As a surprise for the guests, the couple hand-made each person a ceramic tile, with a hand-drawn picture of their face, and their name on it which also acted as a place-name.

Guests enjoyed a lovely meal, followed by a slice of their lovely three tiered wedding cake made for them by a friend as a wedding gift. The cake-topper was made of painted clothes pegs. Entertainment for the evening was provided by way of an ‘acoustic night’, with the groom taking to the stage with family members to make a very special pipe band.

The couple spent a week honeymooning in St Wolfgang, Austria.