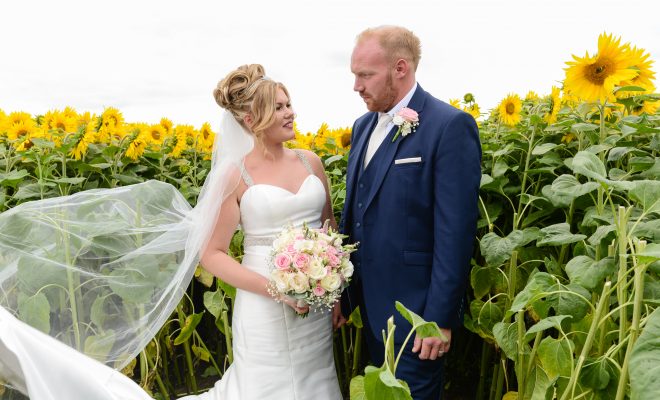 Emma Ginn (née Robinson) will always remember standing in a field of towering sunflowers on her wedding day, while wearing a shimmering gown fit for a princess… and pink wellies to boot!

The Castlederg lady wed her prince, Bryan Ginn in the flower-filled Lisleen Methodist Church, Killen on August 4, 2018 during a beautifully traditional service performed by Reverend Sam Livingstone. The newlyweds’ wedding reception took place in the ballroom of the stunning Silverbirch Hotel, Omagh, and the pair were keen to point out that the hotel staff were exceptionally helpful on the day and throughout their planning. 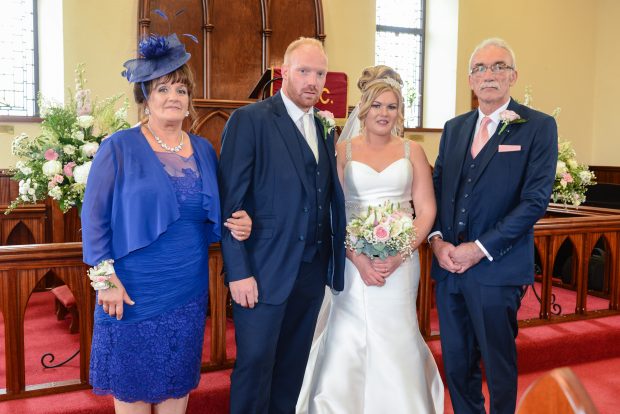 Emma and Bryan, alongside William and Angelika Ginn, parents of the groom.

Emma (25), who works at Russell’s of Omagh, first met Bryan (28), a joiner, in a small pub in Lack in May 2013. The pair exchanged numbers and had their first date a week later. “Bryan was really funny,” Emma recalled. “He had a good sense of humour, and made me laugh. Both of us enjoy a laugh and a bit of craic!”

It was on July 17, 2015 that Bryan, from Lack, surprised Emma with a magical proposal. Asking for her hand in marriage, he presented her with a hand-picked white gold engagement ring featuring a rectangular shape, and different types of sparkling stones. “We were going for dinner one Saturday evening,” Emma said, recounting the proposal. “All was quiet, and then the next minute while waiting outside, out popped this little black box! “I stared at it for a few seconds in shock as I really couldn’t believe it.” 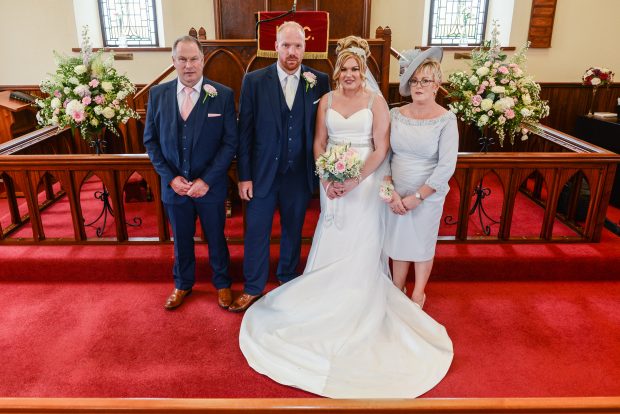 The new Mr and Mrs Ginn, alongside Alan and Deborah Robinson, parents of the bride

She added, “Bryan is very good at surprises: I really wasn’t expecting it! “I eventually got over my shock, and I said yes.” Despite Emma crying tears of happiness during the proposal, she was equally as delighted when she was told afterwards that the County Fermanagh man had asked her father’s permission first. “Bryan, Mum (Deborah), Dad (Alan) and I were in Castle Archdale one Sunday a few weeks before the proposal,” Emma explained. “When Bryan got my dad alone, he asked his permission if he could marry me. Dad was over the moon. “I thought it was very respectful and good manners that Bryan did that.”

The pair enjoyed their engagement celebrations before beginning their wedding planning in October 2015. Attending local bridal fairs further helped to inspire the newlyweds-to-be, who were keen to shop local. “I had a good idea of what colour scheme wanted, which was a pale pink,” Emma said. “I also knew that I wanted a traditional wedding from day dot, and so we had our ceremony in the church where I grew up. “We additionally loved the idea of incorporating vintage items into our day, and we made sure to include lots of sparkle!” 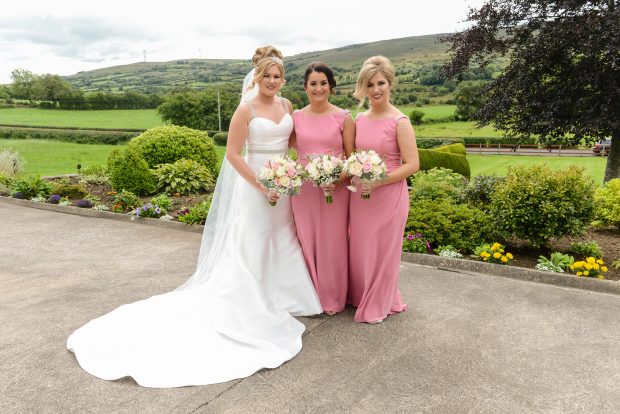 As Emma is from Castlederg and Bryan is from Lack, the pair ‘met in the middle’ and chose the Silverbirch Hotel to host their wedding reception. “At the time, the hotel were creating a brand new ball room, and I thought that it was something new and different,” Emma said. “The room was stunning, and all of the staff were so helpful. The hotel couldn’t be faulted.”

Emma said that shopping for her perfect dress was her ‘favourite part’ of her wedding day planning – especially as she found the style that she had been dreaming of from Lavender Lily in Castlederg. The ivory gown of flowing sating featured a plain design, sweetly decorated with a diamond belt and straps. “As soon as I saw it, I said ‘that’s the one’ and it was,” she said. “I simply fell in love with it.” The ensemble was topped off with a lengthy train with buttons cascading down the back, and Emma wore a long veil to match. 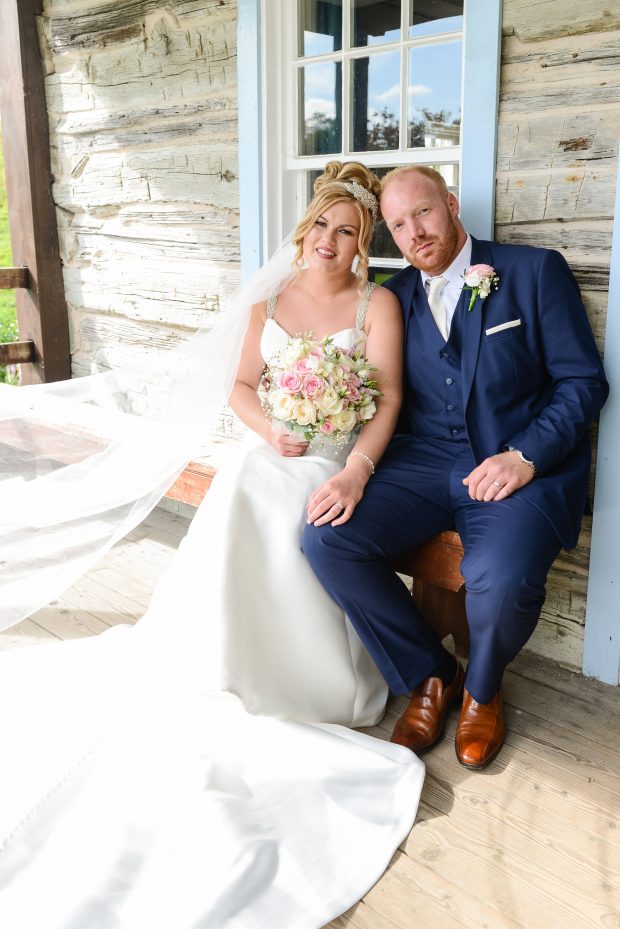 Emma alongside her husband, Bryan at the Ulster American Folk Park on their wedding day

Emma’s wedding day was greeted with great sunshine, and the Castlederg woman said that she ‘sat back, and enjoyed every single minute’ of the morning preparations. “We were all very chilled and went with the flow,” Emma said. ‘We kept everything on-track, and even made time for a little glass of fizz.” After being whisked away to Lisleen Methodist Church in a vintage vehicle with its top down, Emma recalled feeling a little emotional when she reached its doors alongside her father, Alan. “But I managed to hold it together,” she reflected.

During the service, the newlyweds enjoyed two readings – performed by a friend of Emma’s, Sheryl Hamilton, and a niece of Bryan’s, Katie McDonagh – and two hymns. “Reverend Livingstone conducted a lovely service, but we were a bit nervous when saying our vows! “However, overall it went really well and really smoothly, and Jemma Lowry sang beautifully while we signed the registrar,” Emma described.

“The church was decorated with pink and cream flowers, and we had a vintage bike outside which was lovely.” After the ceremony, the pair travelled together to a gorgeous sunflower field in Ardstraw, planted in aid of Cancer Research, for some memorable wedding photos. “It was a lovely place to get some photos done, and for a very meaningful cause,” Emma said.

“I wore a pair of pink wellies underneath my dress when I entered the field – something that I didn’t think I’d be wearing on my wedding day!” The couple later headed to the Ulster American Folk Park for more pictures, before making the short journey to the Silverbirch Hotel where they celebrated, partied and danced the night away as husband and wife. “We had a truly fantastic day from start-to-finish,” the new Mrs Ginn concluded. 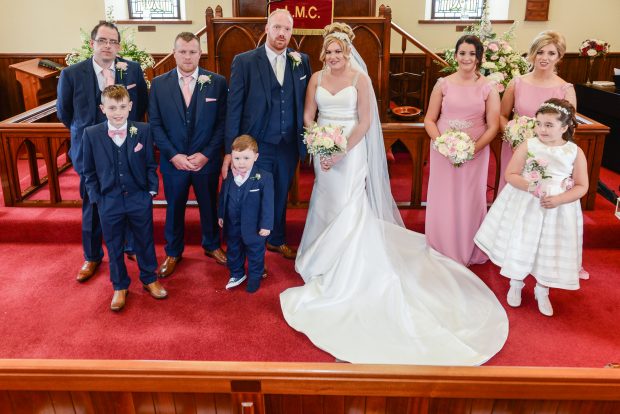