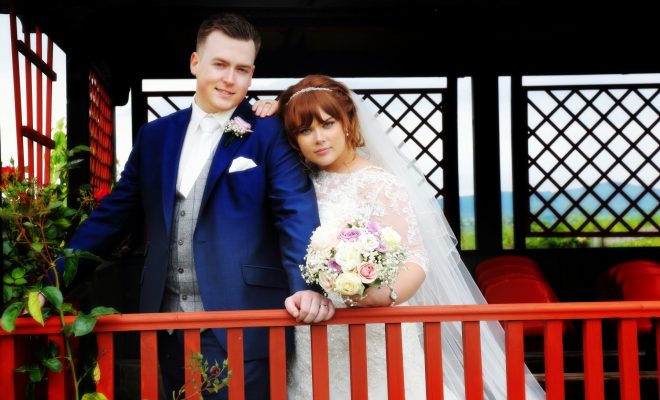 A magical proposal in the heart of Disneyland Paris transformed into a perfect wedding that Tracy Loughlin will simply never forget.

The Sion Mills girl married her love, Gareth McLaughlin on June 10, 2016 in the Church of the Good Shepherd, in a ceremony performed by Rev Mark Greenstreet.

First meeting the Strabane man when he began working in Allstate back in April 2012, Tracy said it was Gareth’s “kindness and humour” that drew her to him.

Together for a whirlwind year-and a- half, it was when the pair went away on their first holiday together that Gareth (24) asked Tracy (27) for her hand in marriage in the most romantic way.

“I am a Disney fanatic so he planned to ask me while we were away to Disneyland Paris – and I had no idea,” she explained. “I wanted to go on all the rides the first morning we were there but he didn’t want to, he just wanted to walk around the park.

“I thought he was a big chicken, and scared of all the rides,” she laughed. “But little did I know he had the ring in his pocket the entire time and was trying to pick the perfect place to propose.”

Holding a delicate Minnie Mouse ring box in his hands, Gareth finally did get down on one knee – in front of the sparkling wishing well beside Sleeping Beauty’s castle. Opening it up, he presented her with a yellow gold and white gold engagement band, featuring a twist and a shimmering diamond in the centre. 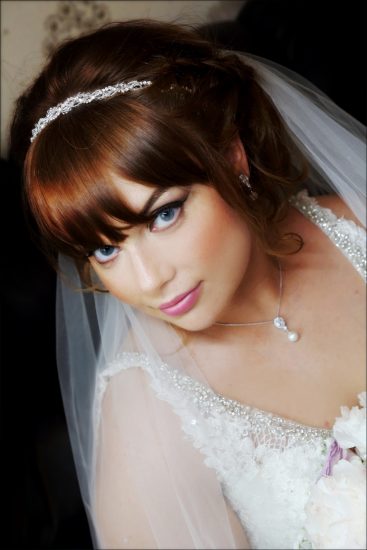 The new Mrs Tracy McLaughlin on her wedding day.

“I loved the ring, and his proposal was just perfect,” Tracy said. “But I was in shock. I laugh when I’m nervous, so I just laughed at him for a minute… So much so that he had to ask me twice.”

Excited to plan their wedding, the couple booked their wedding venue, the Silver Tassie, Donegal a mere few weeks after the engagement.

“The first time I was in the room, it was the sparkly chandeliers that did it for me… I fell in love! “But everything about the venue was perfect and the food was amazing!”

Setting the date for Spring 2016, Tracy explained that she had her heart set on a traditional wedding, with a guest list of approximately 120 people.

“I also always knew that Disney would have to play a part in the wedding, so we had a few touches here and there Disney-related, such as our Mickey and Minnie cake topper.”

An exciting six months into her engagement, it was in Tomorrows Wedding Emporium in Derry that Tracy was almost moved to tears after finding her dream gown. The sparkly ivory number flaunted a top for the ceremony, which could be removed to look like a different dress for the reception.

“In the first shop I went to, I tried on about six dresses and didn’t like any of them – even though they were what I thought I wanted,” she reflected. “Then I went to the second shop, Tomorrows. The shop owner picked out the first gown I tried on and I almost cried… almost!. So I knew it was the one.”

On the morning of Tracy’s big day, her stomach was in knots due to nerves – but it was Gareth who let his emotions show during their ceremony. “The entire morning of the wedding I was a nervous wreck,” Tracy said. “But the service was perfect.

We had put so much thought into the readings, music and the flowers. So it was really lovely to see everything come together on the day.

“Gareth’s speech was quite emotional… he cried for most of it which I wasn’t expecting!” she smiled.

Once married, the newlyweds paid a visit to well-known Newtownstewart man, Ivor Scanlon’s home where they got their picture taken beside his picturesque wishing well – a nod to how Gareth first proposed. 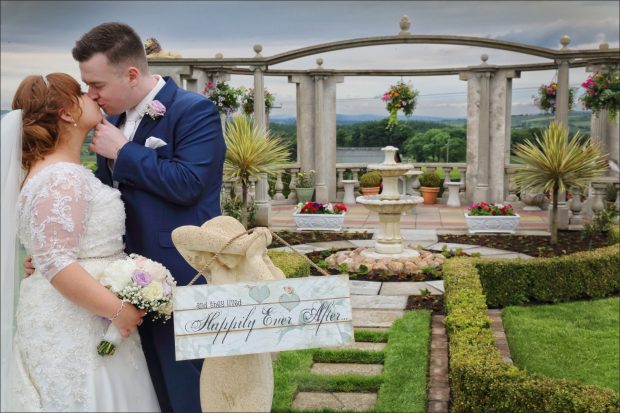 They were also snapped standing beside Ivor’s six foot glass mural of Muhammad Ali – as their wedding day coincidentally fell on the same date the legendary boxer was laid to rest.

“Everything about our wedding was perfect,” Tracy concluded. “There was so much time and effort put into planning the day, and it was just great to see it all come together.It was amazing to spend it with the people we care about the most.”