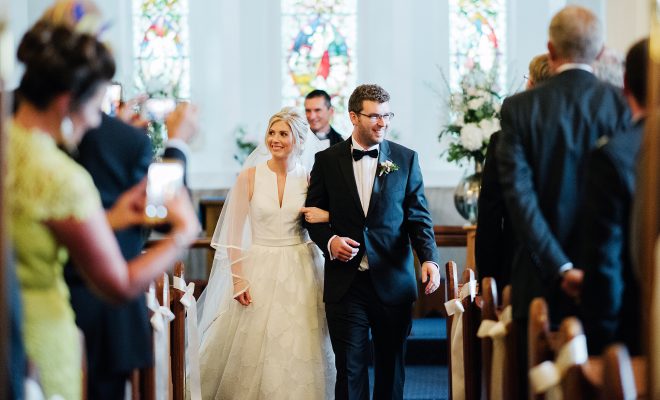 A wedding filled with unique and personal elements gave Amanda Giles and John Graham a perfect day. Not only did the beautiful bride don an antique engagement ring from the ‘40s and a wedding dress decorated with rose patterns, but the pair’s lovely three-tier wedding cake was also specially baked by the mother-of-the groom.

Amanda and John were wed at Clogherny Church of Ireland, Beragh in a traditional ceremony performed by Rev Andy Heber on August 1, 2018. Their wedding reception took place at the quaint Farnham Estate, Cavan. It was a place chosen by the couple due to its scenic setting, and because its reception room was separate from the main hotel – a feature that meant all the guests were together.

Amanda, who is a teacher, first met John, a service engineer from Omagh, during her time at Omagh Academy. In fact, they were in the same class for seven years and recall September 1, 1999 being the date of their first day at school. However it wasn’t until July 2015 that the pair began dating.

“I moved to Spain after university, and then came home after four years,” Amanda reflected. “John decided to get in contact, and we went out after that. Our first date was on July 17, 2015. “I found him to be very funny and kind.” 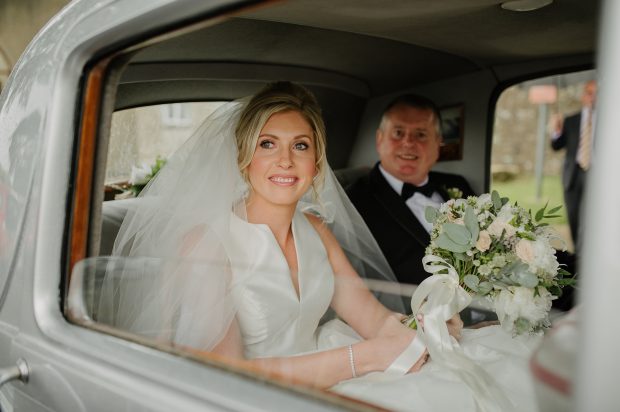 Amanda arrives at the church with her Daddy, Robin Giles.

Together for two years, it was on July 29, 2017 that John proposed during a romantic walk in the gardens of Mount Wolseley, Carlow. “John is a sheep farmer and we have been to various sheep sales together,” Amanda explained. “HIs favourite is in Tullow, County Carlow. “We went there in 2016, and went for lunch in Mount Wolseley, a very nice hotel.

John told me that the next year we would come back and stay in the hotel. “And so we went back in July 2017, and visited the sale,” she added. “I thought something was wrong as he didn’t stay long and didn’t look at any sheep. “We got ready for dinner, and he took me for a walk around the gardens. That’s when he got down on one knee and proposed.”

John presented Amanda with a gorgeous antique sapphire ring from the 1940s. The ring featured a gold band with a sapphire in the centre, and two glittering diamonds on each side. “I felt very shocked and so I was very quiet,” Amanda said. “John was worried as I didn’t say very much.” 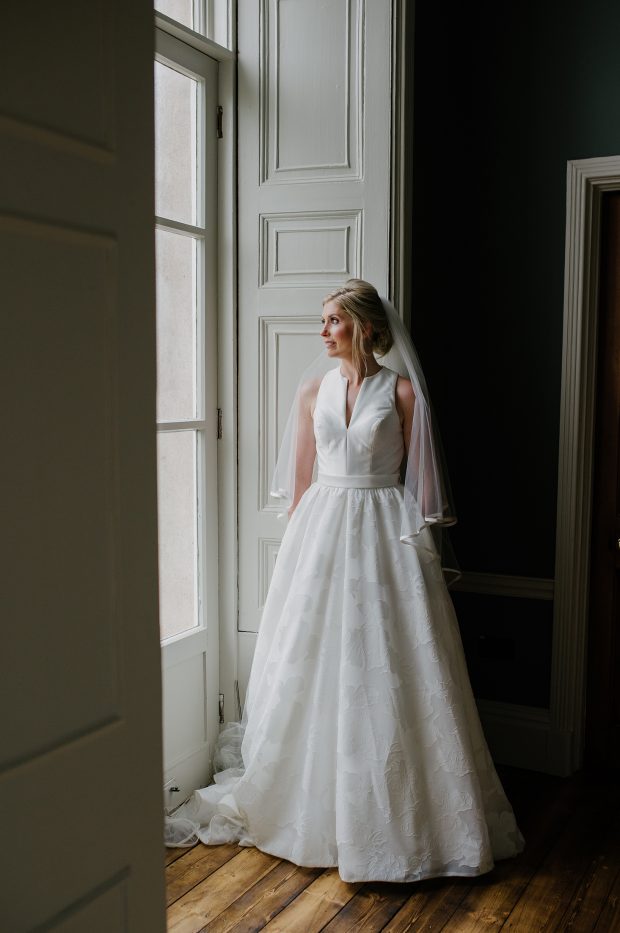 Amanda looked stunning in her Justin Alexander dress from Serendipity Bridal in Fivemiletown.

With their sights set on being wed the following year, both Amanda and John got stuck into the wedding planning. This hard work paid off, as they had their wedding venue booked less than a month after the proposal. “We are both very similar and knew we didn’t really want a theme or a particular style on our day,” Amanda said. “We just wanted a simple and elegant wedding.”

When the time came to shop for her wedding dress, Amanda initially thought that she wanted a short gown. And indeed, found one that she loved during her first appointment at a bridal dress shop. However, she had booked places in two other stores and felt that she should go along anyway to view the selection. And good thing Amanda did, as she ended up choosing a long dress.

“The gown I went for had a long skirt with a rose pattern,” Amanda described. “It was ivory in colour, with a plain top. “I knew when I put it on that it was the one for me.” 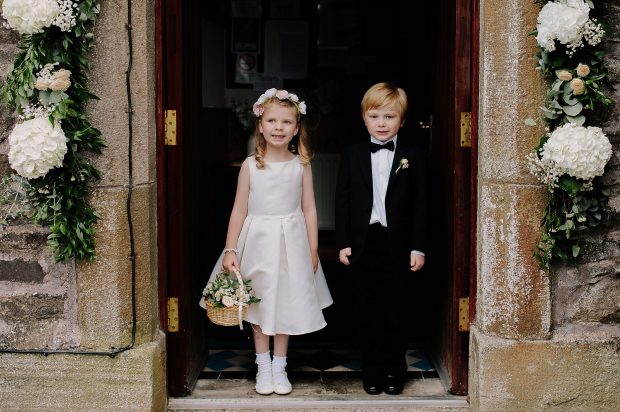 When Amanda’s wedding day arrived, she described feeling ‘very happy and excited for the day’. “I enjoyed all the preparations for the day, and loved having my bridesmaids and mum there getting ready.” Amanda and her bridal party were whisked away to the church in true style. She journeyed to Clogherny Church in a stunning Bentley with her father, Robin while her mother, Winnie and her bridesmaids travelled there in an Imperial Ghost.

Amanda said that the service, laced with special moments, was ‘traditional and personal’. “John’s aunt and uncle played the piano and violin during the signing of the register, which was lovely,” she recollected.

The hours flew by, and eventually it was time for the new Mr and Mrs Graham to tuck into their wedding cake, baked by mother-of-the-bride, Barbara Graham. What’s more, the three-tiered cake decorated with fresh flowers boasted three of Amanda’s favourite flavours. “Barbara is a great cook,” Amanda said. “She regularly makes me cakes, so she knew what I would like. “It was butter-iced around the edges, with fresh flowers on the sides. “She also made a fruit cake, with ribbon around the bottom which beautifully matched the bridesmaids dresses.”

With band and DJ providing the music, Amanda and John danced the night away as husband and wife. “Our wedding was perfect and we wouldn’t change a thing,” the 30-yearold concluded. “We loved every minute and had a great time.” 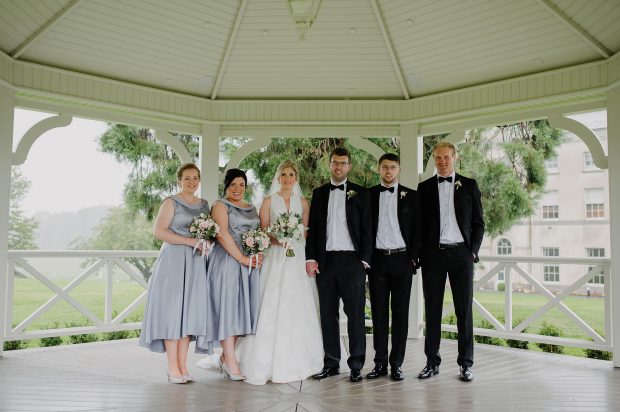