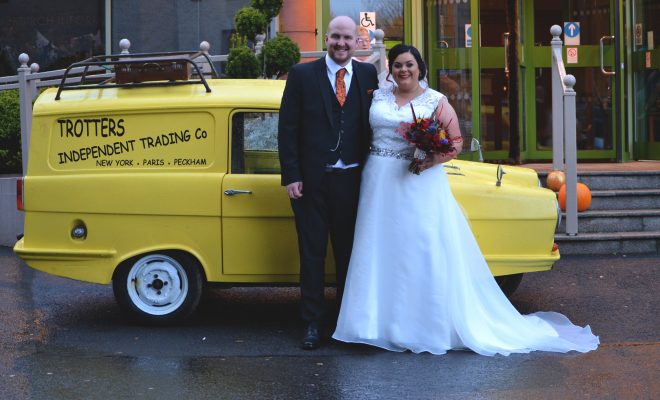 There aren’t many weddings which feature an impressive fire-breathing spectacle… Even less so, a display led by the groom!

But bride Dayna Gaskin (née Brown) explained that both herself and husband, Stanley were both formerly circus skill performers, and they wanted a photograph with all their guests crowded around the burning display. And their wedding took place on October 31, 2018, afterall.

While you could argue that breathing roaring fire honours the spirit of Halloween perfectly, it was just one of the many unique elements of their special day at the Silverbirch Hotel.

Another was Dayna’s wedding gown. The Omagh woman didn’t try on a single dress, neither did she visit any bridal boutiques. Instead, she found a fuss-free, elegant gown which she liked, and sent off her measurements to an online wedding dress company who tailormade the number. “I must be the only bride that didn’t want to go dress shopping, and for me, it wasn’t an important factor in my wedding planning,” she explained.

And while Dayna and Stan were presented with rings to symbolise their future during the ceremony officiated by registrar Hazel, so was Daisy – the pair’s beloved little girl. 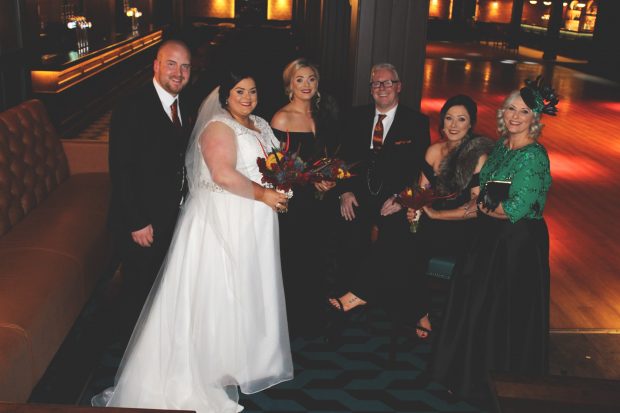 The new Mr and Mrs Gaskin celebrate their Halloween-themed wedding alongside
their loved ones.

“During the ceremony, Stan had a little something written that he wanted to say to Daisy, our two-year-old,” Dayna described. “He spoke of how our wedding isn’t just about mummy and daddy, but about her and how she is the best part of us. “He said because we were getting rings, that she should get one too and gave her a special princess ring. There was not a dry eye in the house.”

Dayna, a universal banker with HSBC recalled how she first met Stan, a butcher from London during her time at Chester University. They were doing the same course at the university, Theatre Studies, and it was during a wintry night out at the Students Union in early December 2009 that they properly spoke.

“One of our friends introduced us, and we stood outside for hours talking in the freezing cold,” Dayna remembered. “It was snowing. “Straight away, we had loads in common. Stan made me laugh, and he was really sweet.”

They began dating on March 18, 2010 and much to Dayna’s surprise, Stan got down on one knee on November 28, 2013 at her parent’s house. “I had no idea that Stan was going to propose,” Dayna smiled. “I had flew home from Chester back to Omagh for my birthday. “Stan had told me that he couldn’t get the time off work to come with me, so I went on my own.

“My whole family was going to see ‘Mum Says’ in the Strule Arts Centre, and when I got there, Stan was sitting with my Dad, Eddie. “I was so shocked to see him,” she added. “We had a brilliant night out, and after drinks in Daly’s, we went back to my parent’s house.

“We were sitting in the kitchen, just having a cup of tea, and I was telling Stan how my Granny had joked with me earlier, asking ‘Did I have a ring yet?’ and how he might leave me (clearly knowing full-well what was going on).” As Dayna relayed this to Stan, he replied, “Sure you know I wouldn’t leave you” and got down on one knee with a white gold and diamond-studded ring which boasted a halo of diamonds in the centre. “I couldn’t believe it,” Dayna said. “I was so shocked and over the moon when it happened.“We had planned a birthday party for the next night that quickly turned into an engagement party!”

The pair began to plan the wedding very soon after their engagement, with the hopes of being wed in 2015. However, other plans soon paved their future. “In 2015, we had our beautiful daughter, Daisy so the wedding was put on hold,” Dayna said. “When we first started planning the wedding, I knew I didn’t want a typical white wedding, originally planning a rockabilly 1950s sort of theme.

“After we had Daisy, I really didn’t want a big wedding, but Stan knew I would miss out if I didn’t do it how I wanted,” she added. “When we were looking at dates, I’ve always loved Halloween. I think the time of year is beautiful, and the colours just stand out. “When I started planning properly after we had booked our date, we went with the Halloween theme.”

When Dayna’s big day finally arrived, she said she felt ‘calm’ and enjoyed getting her hair and make-up at local hairdressers, ‘The Salon’. “When we went to the Silverbirch Hotel to get ready, I only started to feel nervous and emotional when I put on my dress,” she continued. As Dayna walked down the aisle holding her dad’s hand she became emotional.

“Our service was so personal,” she said fondly. “As we had a registrar, we were able to tailor the ceremony to us. “The whole room laughed and cried with us.” And the celebrations didn’t end after the ceremony – in fact, that was just the start of a day filled with entertainment.

“Stan is a massive Only Fools and Horses fan, so as a surprise, I got the Trotter’s Independent Traders Van to come to the venue,” Dayna said. “So naturally, we needed plenty of photos with it. “Also, both myself and Stan have been circus skill performers in the past, and we both can fire breathe, so we wanted to incorporate that into our day too. “We got all our guests outside for a photo with Stan fire breathing. Thankfully the weather stayed dry for that.”

Later on, with Rico’s Groove from Monaghan and DJ Chris at the helm, there wasn’t a minute when the dance floor wasn’t full. “My mother-in-law, Vicki actually commented that she’d never seen a bride dance so much!” Dayna laughed. “I didn’t leave the dance floor all night. “In fact, during the DJ set, my dad, two of my uncles and Stan all came out dressed as The Village People and danced to the YMCA as a surprise for me. It was hilarious at 1am.” “Our wedding was just spectacular,” the 27-year-old concluded. “I wish I could do it all over again. We had the best day, and we can’t thank everyone involved enough.” 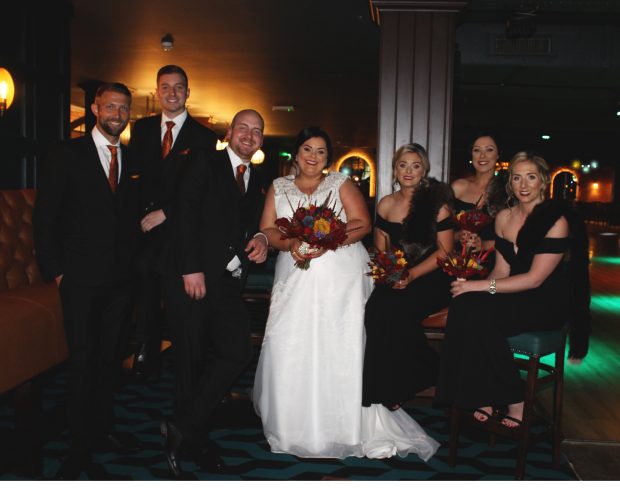