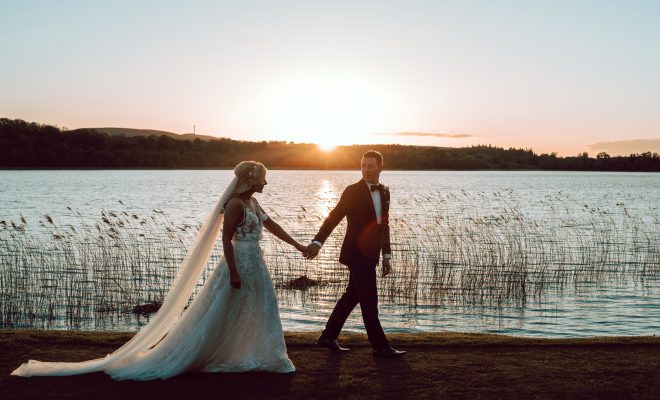 A romantic proposal beside a breathtaking lake in Fivemiletown transformed into a modern wedding by the shores of Lough Erne for Danni Darragh and Aaron Shortt.

Indeed the pair’s special day featured a wealth of contemporary elements, such as the bride’s two-piece body suit and skirt, her three bridesmaid’s glistening blue numbers which were tailor-made, and the groom’s wedding transport – a sporty Ford Mustang.  As music filled the walls of Clogherney Presbyterian Church, Danni and Aaron were wed by the Reverend Norman Smyth on May 4, 2019.

Beautiful bridesmaids on the day were Alicia Clarke, Aimee Buchanan and Vicki Boggs, while David Thompson was Best Man, and groomsmen were Matthew Shortt and Joshua Shortt (brothers-of-the-groom). Additionally, ushers were Dean Darragh and Euan Hamilton, flower girls were Jessica Armstrong and Ellie Robinson, and page boy was Isaac Robinson. 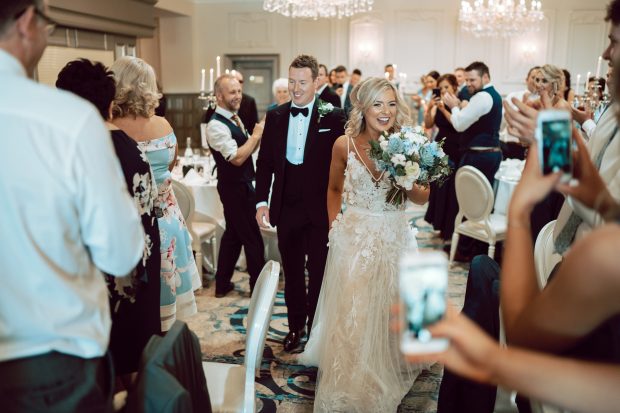 There were so many bright smiles during the wedding day of Danni and Aaron Shortt.

The newlyweds’ wedding reception took place at the luxurious Lough Erne Resort – one of the finest five star hotels in Northern Ireland – and chosen due to its beautiful setting and modern features.

Danni, who is a personal trainer from Gortin, first met Aaron, a parts manager and farmer from Beragh, at the Omagh Rugby Club in September 2015. “I decided to go down to the local rugby club and give ladies’ rugby a try and at the time, Aaron was coaching the ladies’ team,” Danni recalled. “He had a great personality, which was backed up with his good looks and we began dating two months later.”

Together for a year-and a- half, it was on the evening of April 9, 2017 that Aaron surprised the Gortin lady with a thoughtful proposal during a spring trek out to Blessingbourne Estate in Fivemiletown.

“Aaron had been out milking and when he came back in, he insisted he’d like to go for a walk,” she explained. “So off we headed to Blessingbourne and when we arrived, he brought out a basket from the boot of his car and said he had prepared a picnic. He said he knew a good spot down by the boat house where we could eat, but once we got down there, there was a man sitting in a boat inside.”

With Danni unsuspecting, the couple headed a little further around the lake which revealed truly scenic views. “Here, Aaron brought up that we had been joking about who would propose to who, and then said, ‘Well, what if I propose to you now?’,” Danni said. With the backdrop setting the scene, the Beragh man got own on one knee and asked Danni for her hand in marriage. “I was speechless,” Danni said. “I was in shock, ecstatic, buzzing and emotional.” 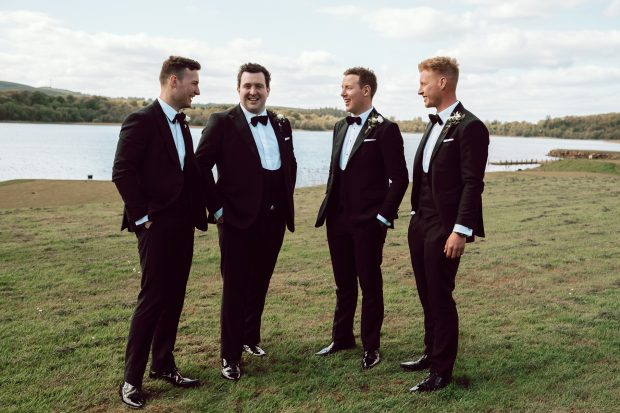 As he proposed, Aaron opened up the ring box (upside down!) to reveal a shining platinum engagement ring featuring a band of glittering diamonds, and a majestic diamond in the centre, surrounded by smaller diamonds. “I couldn’t have picked any better; it was perfect,” Danni said.

The pair then began planning for their wedding straight away, and from the beginning, Danni had her heart set on a more modern-themed day. “I just wanted something different that people hadn’t done before, but at the same time I wanted it to be classy. We decided to choose the Lough Erne Resort for our wedding reception, as it has a beautiful setting and is very modern. It was perfect for what we had pictured.”

Unfortunately Danni’s experience of wedding dress shopping “wasn’t great at the start” – but thanks to the smart thinking of bridesmaid, Alicia Clarke, things very quickly got better. “I wanted a dress that was tight-fitted and plain, but when I tried them on, I didn’t get that wow factor,” Danni explained. “It wasn’t until Alicia said that ‘we need to try something different’ that our luck began to change.”

During a trip to Forever Bridal in Belfast, Alicia pointed out a two-piece body suit designed by ‘Noya’, featuring an ivory skirt, with different lace patterns and flowers attached. “She said to me, ‘What about trying this one on?’ and I replied, ‘Yeah, why not?’,” Danni recounted. “And when I put it on, I knew straight away that it was my dress. I had found the feeling everyone talks about.” 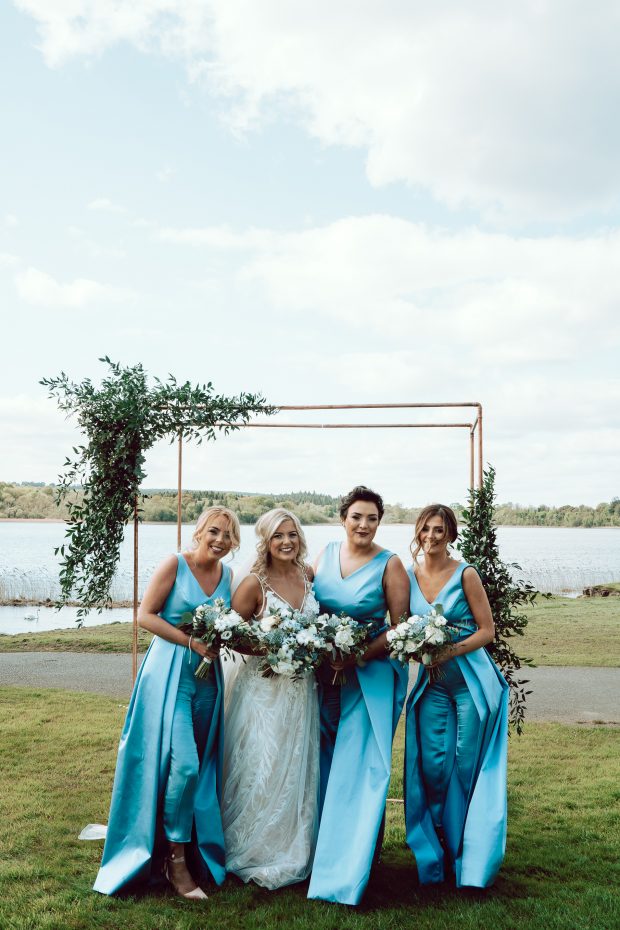 On the morning of her wedding day, there was bright unbroken sunshine, and Danni said that she felt ‘really excited’ for the day ahead. “I couldn’t wait to see Aaron at the top of the aisle,” Danni said. While Aaron travelled to the church in Danni’s boss’ Ford Mustang which he was ‘buzzing about’, the blushing bride chose a convertible Beetle for her wedding transport – and she was whisked away with the roof down to soak up the sunlight.

At Clogherney Presbyterian Church, Reverend Smyth performed a ‘very personal service’ for the newlyweds which featured many memorable moments. “It felt like it was just Aaron and I in the room,” Danni recalled. “When the last hymn was sung, we felt very emotional as it was the hymn we played at my granddad’s funeral just nine months ago. He was very much missed at our wedding day.”

For Danni (aged 25) and Aaron (aged 27), their wedding day, spent alongside their beloved family and friends, was simply perfect. “Our wedding was unbelievable; so much more than we dreamed of, and we wouldn’t have changed a thing. “We would like to say a massive thank you to our family and friends: It wouldn’t have been the same without you, and Aaron and I appreciate you all so much.” 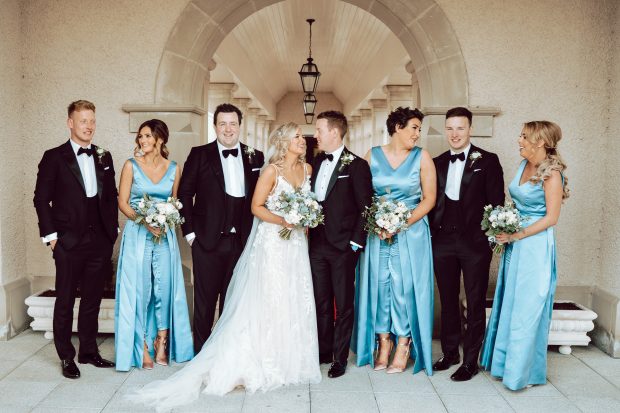 Related ItemscakeCeremonyengagementflowersproposalreceptionringvenueweddingWedding dress
← Previous Story 7 Things To Remember When Creating Your Wedding Budget
Next Story → Families at War: How to Deal With Family Hostilities Before Your Wedding